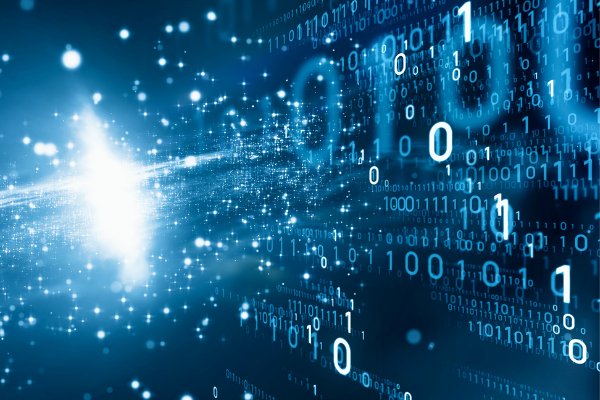 What is quantum computing?

How are quantum computers different from traditional computers? Traditional computers work with bits, which represent a value of either one or zero. Quantum computers, on the other hand, work with qubits, which are subatomic particles that store data, and which have multiple properties. In classical geometry, a dot has no dimensions. Bits are like zero-dimensional dots, they either are there (true, 1) or they are not (false, 0). Compare that to electrons around nucleus. Just to locate them you need three dimensions. So, the first major difference between classical and quantum computing lies in having three dimensions for the underlying data bits vs having just one on or off state for classical computers. This means that a qubit can store considerably more information than a bit can.

A second difference has to do with the interaction between bits. Bits have a logical value of false or true, which means their interactions are dominated by traditional Boolean logical operators: NOT, AND, and OR. Interactions between electrons are far more complex. Here you also have to take phenomena into consideration like superposition, entanglement, and interference. This implies not only that they can integrate far more information but also are capable of far more complex calculations.

The third and final major difference between classical and quantum computing has to do with their efficiency. In essence, every action a traditional computer takes consists of very fast sequences of switching an electric current on and off. This is a one-directional process that is not reversible, and it produces heat. Quantum operators on the other hand are bi-directional, which means actions can be undone, and the original state of the electron can be reinstated This implies they have more processing information per operation, which in turn translates into being able to operate faster, and without necessarily producing the heat that traditional computers generate.

What this all means is that quantum computers will be millions of times more powerful than today’s most powerful computers. What are the benefits of quantum computing?

A second series of benefits has to do with all the things quantum computers can be used for. Now, most usage scenarios that are typically predicted are not in the legal field. They include things like discovering new drugs, creating better batteries, predicting the weather, picking stocks, processing language, helping to solve the travelling salesman problem. (If a company has multiple salespeople, how can they best be deployed geographically and timewise?) Another usage benefit of quantum computers is the enhanced security they can offer. The other side of the coin of this that those who work on traditional devices will have a far weaker security that can easily be broken by quantum computers. This has serious implications for presently secure technologies like Blockchain, which no longer would be secure. Quantum computers will also revolutionize cloud computing, allowing for faster, virtually instantaneous communications.

A last series of benefits has to do with artificial intelligence, where major breakthroughs are expected. One of the substantial problems AI faces is that co-occurrence does not necessarily imply correlation, and that correlation does not necessarily imply causation. Present-day machine learning is getting better at discovering correlations. With quantum computing, AI is expected to be far better at discovering causality, rather than correlation. A second expectation is that Trusted AI will take centre stage. With quantum computers, AI is expected to learn to discover and neutralise its biases, and to explain why it came to certain conclusions.

What is the relevance of quantum computers for lawyers?

A second area where quantum computers pose a threat is the protection of privacy and personal data. Big tech companies like Google and Facebook already have a tremendous amount of information on people. Imagine what information they could gather if they were using quantum computers. Or think of government agencies with quantum computers that could easily access any traditional device whenever they want to. One author rightfully points out that this would effectively jeopardize all legitimate whistleblowers as their anonymity could no longer be guaranteed.

There are of course many areas where quantum computers can be beneficial. A first such area where they will be a useful tool is language processing. Quantum computers will be far better at text analysis. This includes legal texts, where they are expected to be able to better understand context. They will also improve the quality of translations.

Quantum computers will also dramatically change the way lawyers work, as they will revolutionize the optimization of the processes and workflows involved. This will not only apply to the way law firms are run, but also to the legal services lawyers offer. Quantum computers will be able to streamline legal research as well as paperwork more effectively.

A related area where quantum computers are expected to modify how legal services are offered is through automated legal advice and automated legal service delivery. Quantum computers will effectively become smarter than even the smartest lawyers. This will give rise to tremendous progress in the field of computational law, which, where possible, automates legal reasoning. (For more information on how this is already being done, read our article on productizing legal services).

Quantum computers will also allow machine learning to become far more effective. This will result in predictive analytics that will project the chances of success for different strategies in a given situation. One author called this prescient investigation.

A final area where quantum computers will be beneficial to lawyers is collaboration, where data can be shared in a more effective way. This will also facilitate cooperation over great distances.

So, should your law firm start looking into quantum computers already? Several IT experts advise to start doing so now, but companies like Deloitte and Gardner are more cautious. They recognize the great potential but point out that not enough of that potential is realized. Their advice is to remain informed about progress that is being made, but that it is too early to make any investments yet.

Shannon Flynn, in Legal Technology Today, predicts that when quantum computers break through, there will be a “short-term pain for lawyers and aspiring lawyers, but the benefits for the average citizen will be clear. Among the benefits will be better representation, lower cost, and greater efficiency. For society, the change will be a net positive.”

This website uses cookies to improve your experience while you navigate through the website. Out of these, the cookies that are categorized as necessary are stored on your browser as they are essential for the working of basic functionalities of the website. We also use third-party cookies that help us analyze and understand how you use this website. These cookies will be stored in your browser only with your consent. You also have the option to opt-out of these cookies. But opting out of some of these cookies may affect your browsing experience.
Necessary Always Enabled
Necessary cookies are absolutely essential for the website to function properly. These cookies ensure basic functionalities and security features of the website, anonymously.
Functional
Functional cookies help to perform certain functionalities like sharing the content of the website on social media platforms, collect feedbacks, and other third-party features.
Performance
Performance cookies are used to understand and analyze the key performance indexes of the website which helps in delivering a better user experience for the visitors.
Analytics
Analytical cookies are used to understand how visitors interact with the website. These cookies help provide information on metrics the number of visitors, bounce rate, traffic source, etc.
Advertisement
Advertisement cookies are used to provide visitors with relevant ads and marketing campaigns. These cookies track visitors across websites and collect information to provide customized ads.
Others
Other uncategorized cookies are those that are being analyzed and have not been classified into a category as yet.
SAVE & ACCEPT